Types of hair loss in women

Female-pattern hair loss (androgenetic alopecia) is the most common type of progressive alopecia in women.

In women, this type of hair loss, also called female pattern hair loss (FPHL) – affects around 50% of those over 65.

The first signs of FPHL may be when a woman may notice her ponytail is smaller or hair parting seems wider.

There is a strong genetic component and FPHL is usually inherited from either the mother or father. FPHL can also start as early as between puberty and age 40, and is generally considered the female equivalent of male pattern baldness. Female pattern hair loss (FPHL) is increasingly being used by hair loss experts as a less committal term when the function of androgens is less specific and other hormonal and non-hormonal factors may be a factor.

Both men and women produce the male hormone Dihydrotestosterone (DHT), which scientists say is the main culprit in pattern hair loss, causing a shortening of the growth phase by attaching to, and shrinking follicles. Healthy hair is eventually destroyed.

In both genders this shortened hair growth cycle also causes hair follicles to undergo a process called miniaturisation. As hair now remains on the head for a shorter period of time, baby-fine wispy hairs are produced, that do not reach their usual length or width. 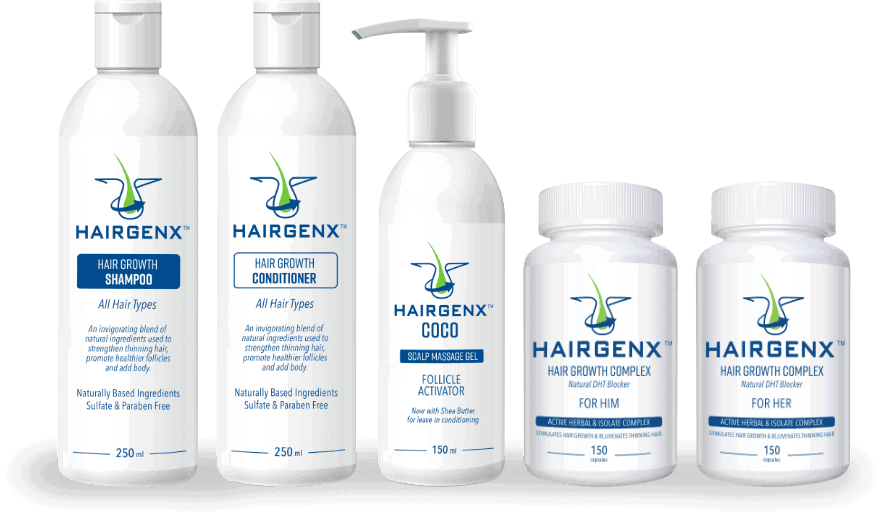 Alopecia areata (AA): Patients with alopecia areata usually lose coin-sized round patches of hair on the scalp, face and chest. It may also affect other areas of the body including the eyelashes, eyebrows and pubic area. These patchy areas of hair loss are usually linked to obvious skin disorders or systemic autoimmune diseases like lupus, cancer, vitiligo and Addison’s disease.

Telogen effluvium: This form of hair loss can develop when the body experiences extreme stress due to triggers such as pregnancy, child birth, major surgery or menstrual-related iron deficiency. This involves a sudden shift from hair growth or resting phases to the hair shedding phase (telogen) and can occur within six weeks to three months after a stressful experience.

Traction alopecia: This type results from trauma to the hair follicles, usually through hair styling that continuously pulls at them like braiding, hair extensions, weaves and tight ponytails.

Other causes of hair loss in women include:

Women are more likely to be emotionally and psychologically devastated when they lose their hair, according to Professor Vera H. Price of the Department of Dermatology at the San Francisco School of Medicine.

Women generally regard their hair as a crucial attribute of their femininity, appearance and identity. Hair loss can make a woman feel as if they are losing part of their identity. The emphasis on looks and societal pressure on women to be attractive can unfortunately be perceived to lead to a feeling of scant support and approval if they have little or no hair.

The types and causes of hair loss in women are not always as clear-cut as they are in most men, especially when considering hormonal changes, diet, hair products and styling habits that can cause breakage and hair thinning.

Women tend to keep a normal frontal hairline, but experience visible thinning at their hair parting and over the crown. Women rarely progress to being near or totally bald unless due to illness.